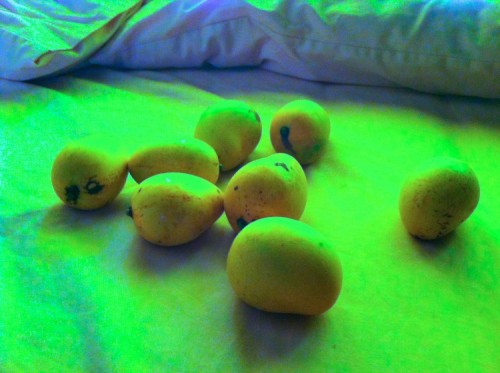 Batch of mangos from the landylady – The Boat House Guesthouse, Kep

Once upon a time, there was a purple mango memorial in Cambodia –

But, before I continue the story, it would be prudent for me to inform you of the thorough and proper historical research methods utilized to generate the foundational concept of this report.

The result of Thorough & Appropriate Proper Research Method #6 was disappointing because I thought I was going to be mind blowingly original by featuring “Mangos in Cambodia” as the topic of this report on recent fieldwork. However, everyone and their mother have already pontificated on the subject of mangos in Cambodia. Thus, a cavalier pride in my creative personal genius was dealt the crushing blow of disappointment.

But I’m still going to talk about mangos. Continuing the story –

It was an impulsive decision that landed me in the charming seaside hamlet of Kep for Cambodian New Year. I was seated in Jars of Clay (a cafe in my Russian Market neighborhood where I’ve had enough Earl Grey tea to pay life homage to whoever the Earl of Grey is), telling the early morning server about my intention to stay in Phnom Penh during New Year in order to avoid the mass exodus of crowds fleeing cities for provincial villages or vacation getaways. Then, an email, text message, phone call, and three-hour bus ride later, I found myself pleading forgiveness for my hypocrisy as I was standing in a location far, far away from the city, specifically on a pier in Kep at sunset, staring deeply into the waters of the blue sea. (Somewhat blue. The shade fluctuates between blue and brown, depending on lighting, cloud arrangement, and whether or not I am wearing my prescription lens glasses.) 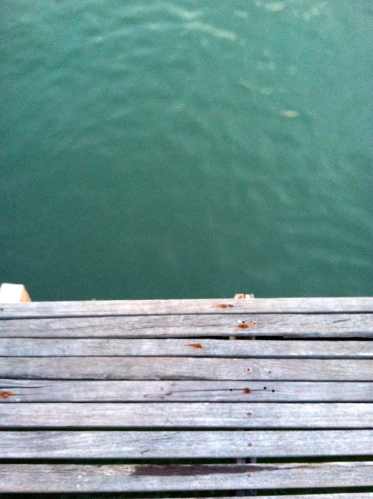 Looking into the water over the pier – Knai Bang Chatt, Kep

Kep had been an enclave of coastal resorts frequented by Cambodian and French elite beginning in the early 1900s (think tropical version of the French Riviera). However it entered a state of disrepair in the years following the 1960s upon the onset of the civil war that would continue up until the Khmer Rouge took over in 1975. I first visited Kep a couple of months ago in January. Upon the conclusion of my second trip there last weekend, I declare that Kep remains the spot in Cambodia most dear to my heart. (I occasionally fantasize relocating and conducting research from there, although I’m afraid my crêpe consumption levels would peak to heights of insanity.) I associate Kep with things like:

All of that is mental comfort food. And that is what Kep is for me – mental therapy. I am liberated in the act of looking down from liberally green and leafy mountain tops from a perch at the Led Zeppelin Cafe in Kep National Park, calmed by catching a wind coming in from the vast ocean on a morning run on the straight, no-brainer Highway 33, mesmerized with imagining the activity that once filled the ruins of foothill villas now long abandoned, and rendered perfectly content with plopping myself down by the waterfront Psar Kdam (Crab Market) with a fish and rice meal that cost me 75 cents. 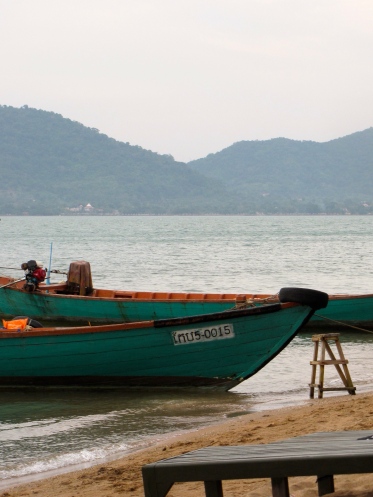 View from shore of Rabbit Island off the coast of Kep – Koh Tonsai, Kep

I could of course always do without the mosquitos, not to mention the ridiculously exorbitant prices charged by motorbike and tuk tuk drivers, but Kep is also of particular interest to me because it is home to the only genocide memorial I have visited more than once during the course of my research thus far.

Since I was back in the area last weekend, I thought I would revisit the memorial at Kampong Tralach, especially since temples are common sites where a community gathers for religious and social activities during the New Year week of festivities. I was also interested in seeing if anything had changed since I first saw the memorial back in January. Once I dropped off my things at the Boat House Guesthouse and filled myself with a sufficient amount of lunchtime sustenance from the market, I hopped onto the back of a motorbike and headed to the temple.

A healthy stereo system was pumping out a stout stream of music when my driver and I rolled into the temple complex at Kampong Tralach. I saw the platform of a stage being set up, lines of colorful fabric pennants hanging from poles and trees, tables and chairs congregated around sugar cane juice carts, two men shoveling together a dirt mound to support a newly constructed altar, and what looked like all village children under the age of 10 years old sitting, running, or biking across the premises. Clearly, a party was in the works. I promptly started marching towards the far right side of the main pagoda, after spotting that purple memorial I first saw there, three months ago. 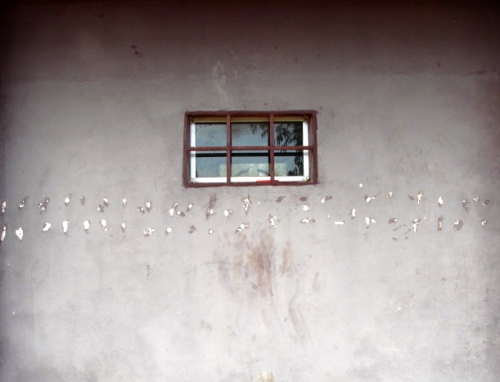 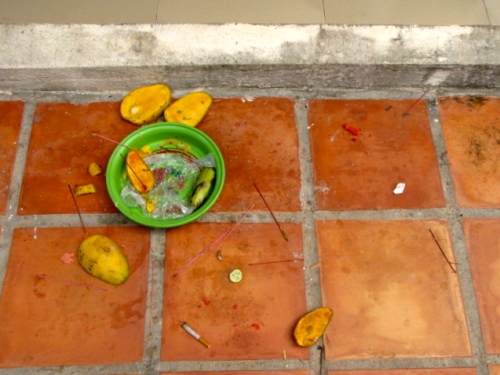 Mango remains scattered among the litter in front of the memorial – Wat Kampong Tralach, Kampot

I found the collection of the latter items to be an oddly amusing sight. In my head, I concocted the details of the scene that had taken place:

A posse of monkeys acquired some ripe mangos, squatted on their haunches in front of the memorial, and then just went to town gnawing away at the nuggets of ripe golden flesh, not bothering to do away the skin. (Because real monkeys eat the skin too.) The mangos evidenced such clean cuts. Thus one of the monkeys must have had a sharp knife handy. Perhaps one considerate monkey in the group was so kind as to bring along a plate. Another, who thought himself above the low-class frenzied feeders, remained composed with a cigarette in hand, observing the nonsense transpiring, and choosing to remain in his lounged position hidden behind the flame of a red candlestick. Then, somewhere in the middle of mango consumption, the eating rascals decided they would light some incense using the cigarette butt of the elusive smoker monkey. They carelessly left the holy sticks of fragrance scattered amongst the ruins of their mango pits when they decided to take off, on the magic broomstick.

Close to the memorial, I consulted with the polka-dotted purple shirt clad and rather toothy Sokpeak Chan Sen, an amiable 68-year woman who happened to be the wife of Chin Sen, the man who let me into the memorial back in January. From her I learned that the mango aftermath was in reality the work of some locals who were simply hanging around the pagoda for New Year celebrations the day before. They had obviously chosen to hang around (advertently or inadvertently) right in front of the genocide memorial. She promptly cleaned u their mess. (Note the plate in her hand.) 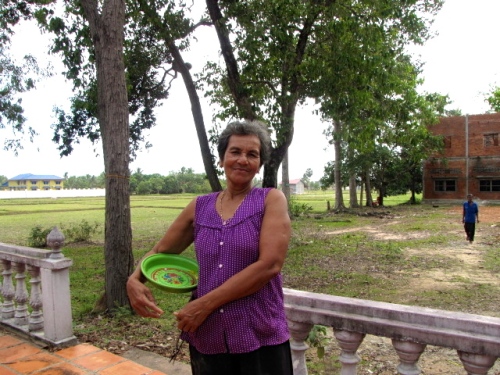 The sight of the disheveled litter in front of the memorial was not particularly pleasant, but I have seen worse. Yet, there was something eerily becoming about the configuration of the mangos before the purple memorial. The Cambodian word for both “mango” and “purple” is svay. It was a fun coincidence, that the fruit and the color had the same spelling and pronunciation. It was peculiar, that the internal pit of the mangos were lying out, as if waiting to fill the external frame of the purple memorial. It was haunting, that the heart of a svay laid before a svay skeleton. It was an unintentional and haphazard, but an uncannily poetic commemorative device.